We cannot crumble, being crumbs already, but we can be crushed, as more calls keep on pouring on our little number of priests, six and a half only so far for the Austrasian region, Fathers Nariai (who entertained me very kindly recently), Pancras, Suelo, Hartley, Elijah, Valan Rajkumar and yours truly. The outlook, much improved from a year ago deserves a visit from you without too much delay.
MICROSEMINARY
On September 17th, we moved at last to the House of Our Lady of Lourdes in Tanauam, three priests, two seminarians, one famous cook.
It is a farm, yet 50 minutes away from the airport... if we had a car!
I am very glad that we have a place where Fr Suelo can truly rest, far from the fawl air of Manila. This place seemed to be at first without mosquitoes, and now in the rainy season, you can sleep with open window and switch off the fan.... therefore no need of buying air conditioning. That is good news because we are so broke, so for instance, todays lunch was cooked on firewood, a little burned, and we had the bananas of the property for desert. The Manila ladies came to the rescue, and the food is now up to resistance standards.
... but so are the mosquitoes.
More than a year after the sspx crisis, at last, i do have a place i can call home, following the seminary schedule as well. Our opponents should be glad to learn that we have only two seminarians to begin with, but we are plying our way bravely through the Questions of the Summa. I preached my first marian retreat the week after. We bought a 6 inch brass bell for the regularity of the house. It is small but the range is good enough; it rings 14 times a day; its name is Little Mary! Fitting, isn't it, for a microseminary...
AUSTRALIA
Not all Australians like vegemite, to my great astonishment, and i reckon the same thing applies to the SSPX decaf. It was claimed to be a Resistance free zone... like Africa.
I began with Sydney having around thirty people interested in the resistance and several scattered groups nearby. Brisbane and Melbourne-Tynong are the biggest groups though, numbering kind of fifty people each, with a distinct reaction from the XSPX, leading basically to the same result. The  reaction of Fr Taouk in Brisbane is near hysterical, given the tune on his cell phones, the threats to the faithful, the refusal of absolution and even the slamming of the confessionnal door. Another Brisbane priest made an interesting comment when presented with complaints about the AFD of Bishop Fellay: "and so what? there are good things in Vatican II!". I hope for Brisbane that Fr Hartley will start to do something, he has 25 faithful on his own, doesn't want to be Novus Ordo, got convalidated by a Thuc line bishop, but doesn't want to be a sedevacantist either, nor does he want to join the reconciliar XSPX. Australia needs another Fr Cummins.

In the spare weekdays, i did a little foray to the Cairns area, and found five souls, but got homesick in Atherton, a place resembling the central highlands of France.

So i headed down to Adelaide where the resistance is down to ten brave souls and should not shrink any further because of the sheer bravery of these people who accept totally to be reprimanded, blackmailed and put away for the sake of the truth. They told me how the Ecclesia Dei people were delighted by Bishop Fellay's visit and famed Adelaide conference last year, which does not differ that much from the Lille conference of May 07th of this year, (where, most notably, the bishop maintain his AFD as a misunderstood, subtle text, not to be used only because it divides, not because it is false).
Just as we must not abandon the Adelaide people, we must take a good care of the Streaky Bay people, because there, the use of the stick has secured the entire group of families for the resistance, to the exception of two or three people. There again the leaders are confirming that they are not getting proper answers from the XSPX priests; it is all about obedience and saying that "these priests are not going to come back, you are not going to have the mass any more... etc." So the whole group is thrown out from the Chapel and we had the Mass in a Shearing shed, quite a beautiflul liturgical surrounding for two first Holy Communions. Led by John Cash, they will hold strong.

In Tynong the resistance to the resistance is minimal, bearing the same results than the techniques of Fr Taouk. There the confreres are more polite, Fr Delsorte was kind, saluting, and Fr Belisle accepted to see me, his point being that the Society's opposition to Vatican II has never been as black and white as we wish to portray it, pointing the Institutio Generalis that is referred to in our Constitution. There appeared again, the new line of the Society, namely that we can cling to what is acceptable in the conciliar doctrine and in the new "magisterium" to draw near the official Church. In his view we are just exagerating, and the liberal slogans in the online presentation of the school are just there because of legal reasons. My question is "Why not say so?" Take the government money if you will, but don't take the goverment's ideas, or at least say that the government forces you to post these errors... but is that permitted by God? I don't think so.
So the point remains, ever since the SG letter of April 15th 2012: Vatican 2 is not a super heresy, we must keep what is good in it, interpret what is ambiguous in the LOTrad, and reject what is bad. Forget about the de Malo of St Thomas Aquinas, and the way heresy has ever crept throughout History. Ambiguity is no heresy, it is a place for discussion and interpretation. That new line has triumphed; it has corrupted leading minds, like that of Fr Belisle. He sent me off politely.
There are two species of liberals, the nasty and the kind one. The second is tougher to deal with, even if the first one tries to inflict pain, tries.
But just as those Fathers refuse to see the doctrinal change, nay, take part in it, there is always, everywhere, a tiny group of faithful that have kept their eyes opened, so we are expecting maybe seventy people for the Bishop's visit in December. We even used the hall where the Society got started for the Sunday mass. It is a great blessing to have Fr Ortiz visiting them in the meantime. Fr Hartley is not the only one in our hopes for permanent priests for these good people, so that the smoking wick does not die, but thrive (say it in Australian accent). 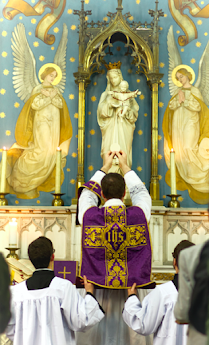